While non-operating room injury rates have shown improvement, overall injury rates in the surgical setting have increased, where adoption of safety devices is limited compared to nonsurgical settings. This has vital implications because The Needlestick Safety and Prevention Act (NSPA) of 2001 was established to reduce the occurrence of all sharps injuries.

In an effort to raise sharps safety awareness, information networks such as EPINet and MSISS have published data from 2002-2016 to educate healthcare facilities and governing entities.

The Massachusetts Sharps Injury Surveillance System (MSISS) was established under the Massachusetts Department of Public Health (MDPH) after enacting regulations for sharps injury surveillance and prevention. MDPH requires all licensed acute and non-acute care hospitals to use devices with sharps injury prevention features as a provision of patient care. All hospitals must also submit an Annual Summary of Sharps Injuries to MDPH.

The Massachusetts Department of Public Health regards operating room safety a “persistent issue” and highlights “the importance of selecting the most effective device, improved training in the use of these devices and improved product design, specifically the mechanism of the sharps injury prevention feature (e.g., shielding, retracting, sheathing)”2

Let’s take a look at the number of sharps injuries reported by EPINet and MSISS from 2002-2016: 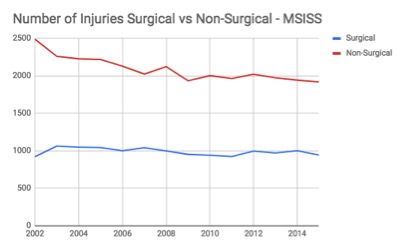 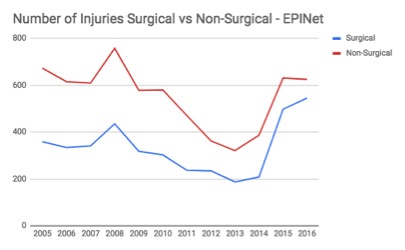 Data from both EPINet and MSISS suggest that sharps injuries in the surgical setting continues to remain a problem. Of vital concern is that most facilities do not offer safety scalpels or other safety surgical blades as an option, despite the statistics. This points to the need for an optimal safety scalpel to help reduce the risk in the operating room. By looking at objective data that spans a 14 year period, we can uncover the areas that need improvement and address the sharps safety concerns of today.